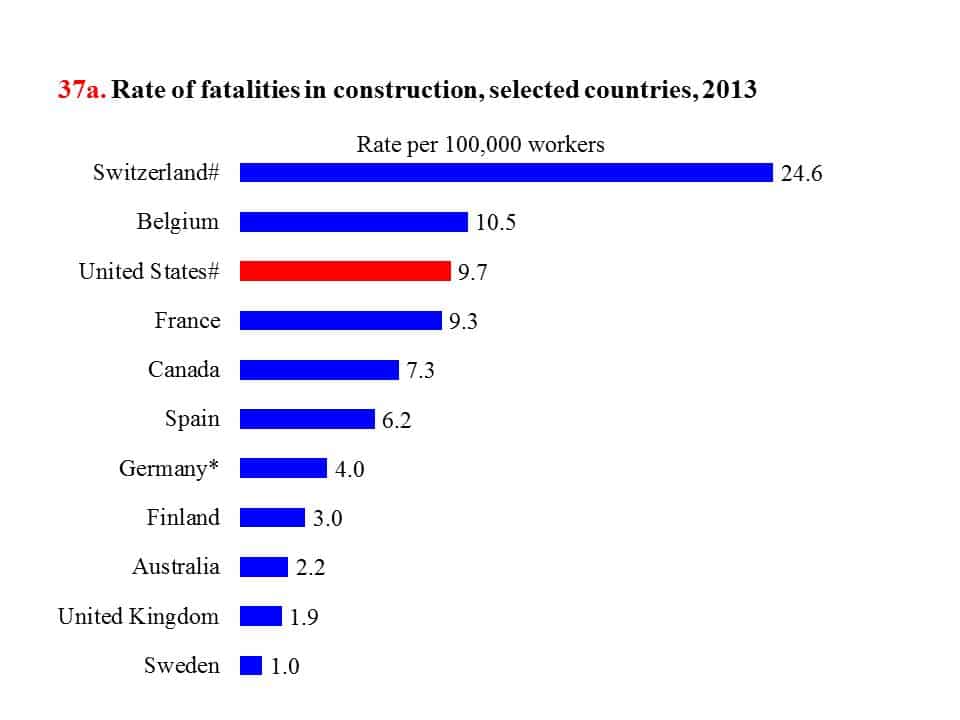 In 2013, construction fatal injury rates reported by selected industrial countries ranged from 1.0 to 24.6 deaths per 100,000 workers (chart 37a). The reported construction fatality rate in the United States was relatively high among these countries, at 9.7 deaths per 100,000 full-time equivalent workers (FTEs, see Glossary). This rate was lower than the rates for Switzerland and Belgium, but more than triple the rate for Finland and Australia, and more than five times the rate for the United Kingdom and Sweden.

In contrast, the nonfatal injury rate in the U.S. construction industry was relatively low compared to most selected countries, at 1.5 injuries per 100 FTEs in 2013 (chart 37b), which suggests nonfatal injuries may be underreported (see pages 38, 40, and 41).  Compared to the U.S., France, Spain, Finland, and Germany had lower fatality rates but higher nonfatal injury rates.

Most of the data reported here are from the International Labour Organization (ILO),1 which compiles statistics on fatal and nonfatal occupational injuries provided by represented countries. Due to the wide variability in data collection and reporting, comparisons across countries must be made with caution.

Except for the United States, most countries use insurance and administrative records as data sources (chart 37c). The U.S. collects data through the Census of Fatal Occupational Injuries and the Survey of Occupational Injuries and Illnesses (see page 38). Countries that base their data on insurance records include only insured employees in their calculations; some include all reported cases, while others include only events that result in compensation.

Another variable among injury rates is how the selected countries classify injuries from commuting accidents. Some of the selected countries, such as the U.S. and Australia, do not count workers’ injuries from road traffic accidents as work-related if they occurred during commuting. However, such injuries can be counted as work-related in Canada if a review board determines it is work-related, while in the United Kingdom, they must meet certain reportable criteria.2

Countries also have different time periods for qualifying deaths and injuries as work-related. Australia, Belgium, Finland, France, and the United Kingdom count fatalities that occurred in the same calendar year as the accident (chart 37c). By contrast, Switzerland counts deaths that occur within the same fiscal year. Germany and Sweden count deaths that occur within one year of the accident, and Spain uses five days as the cutoff point. Similarly, some countries include only injuries with a minimum period of incapacitation. For instance, in Australia, an injury is counted if a worker has been incapacitated for at least five workdays, whereas in Switzerland there is no minimum period of absence.

Changes in data classifications are yet another source of variability. The ILO asks the reporting agencies in each country to align their data with the International Standard Industrial Classification (ISIC) of all Economic Activities. Yet, the ISIC system has changed over time and not all countries adopted the latest version in the same year. For example, while most countries presented on this page reported data using the fourth revision of the ISIC, Australia reported data using the third revision of the ISIC. The classification systems may be similar enough to allow general comparisons at a broad level, but the comparisons may be limited within construction subsectors across countries and time periods. 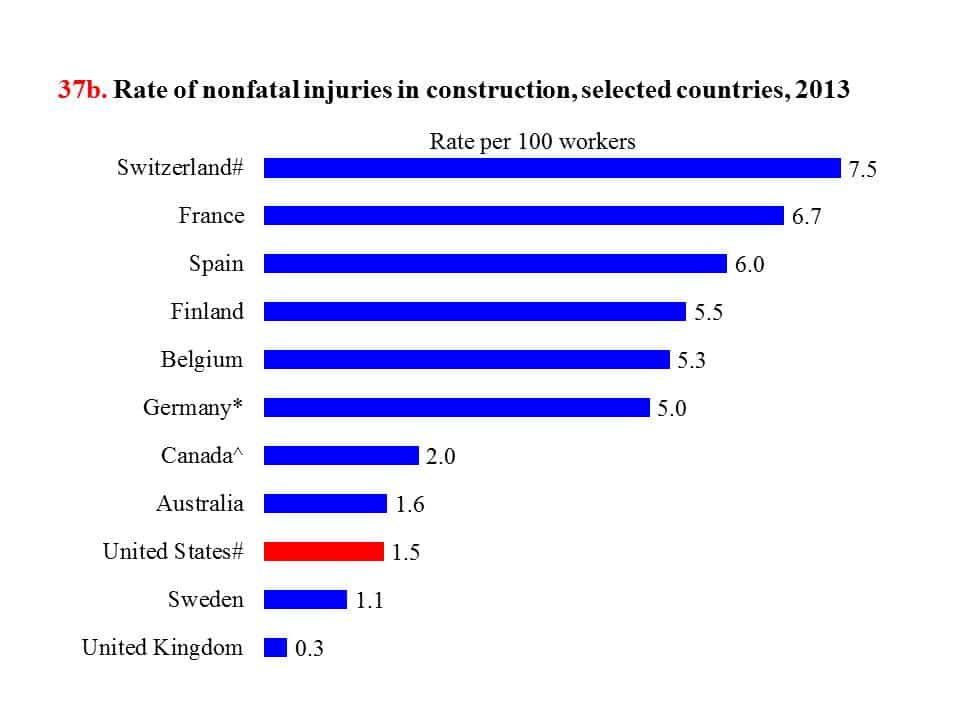 All charts – An asterisk “*” (Germany) denotes data calculated by the CPWR Data Center. Countries marked with a pound sign “#” (Switzerland and the United States) use FTEs to adjust rates. Data for the U.S. on this page are coded by ISIC for comparison purposes and exclude government employees. Thus, the numbers for the U.S. may not be comparable with the data coded by NAICS reported on other pages of this Chart Book. A caret “^” (Canada) denotes the number of nonfatal injuries in Canada is from Association of Workers’ Compensation Boards of Canada (AWCBC), National Work Injury/Disease Statistics Program (NWISP). Employment data are from Canada Statistics. Calculations by the CPWR Data Center.

Charts 37a and 37b –Rates were reported by each individual country separately from the numbers presented in Chart 37c. Due to the wide variability in data collection and reporting, comparisons across countries must be made with caution.