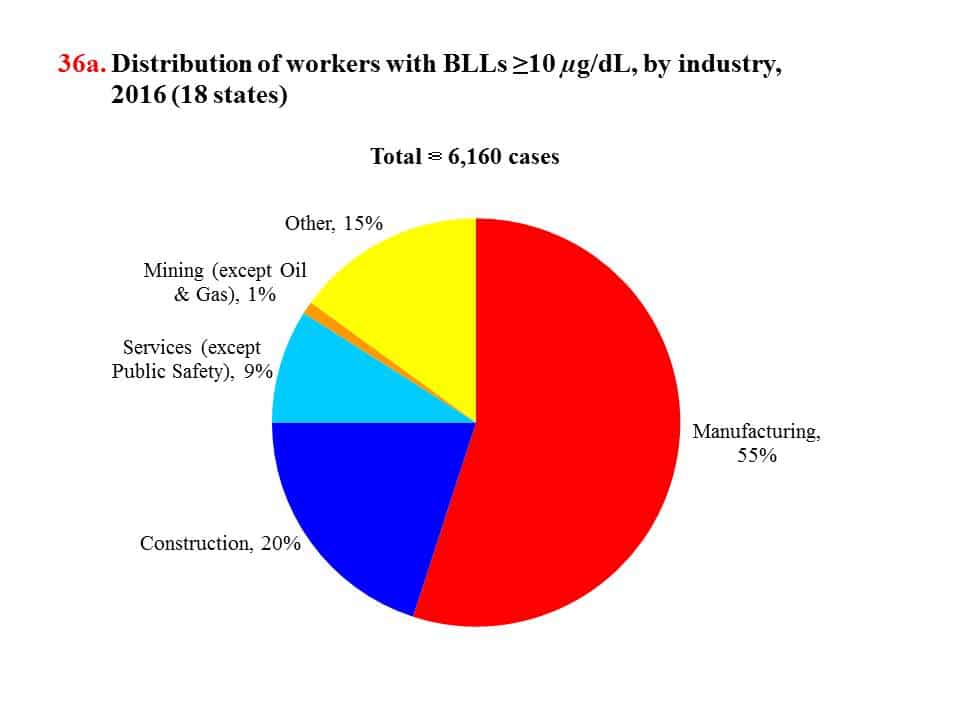 36. Lead Exposure in the Construction Industry

Lead is found in many construction materials, including but not limited to paint, welding wire, and electrical conduit.1,2  Construction workers can be exposed to lead during the handling and demolition of lead-containing products, as well as during tasks that generate fumes and respirable dusts, such as welding, smelting, refining, and soldering.1,2  In addition, construction workers may expose their children and other family members to lead via take-home exposure (such as lead dust on clothing, skin, hair, and tools).3 Lead exposure can result in adverse health effects, such as anemia, hypertension, central nervous system effects, peripheral neuropathy, nephropathy, infertility, and miscarriages.1-5  Lead exposure can be measured by micrograms of lead per deciliter of blood (μg/dL) through a blood test.

Over the past 30 years, the National Institute for Occupational Safety and Health (NIOSH)’s Adult Blood Lead Epidemiology and Surveillance (ABLES) program has worked with states to study lead exposure of adults (≥16 years old) in the U.S. ABLES contributes to the Healthy People 2020 goal of reducing the rate of blood lead levels (BLLs) ≥10 µg/dL among adults.4 When the source can be identified, about 95% of those with BLLs ≥25 µg/dL were exposed at work.4  In 2016, ABLES identified 6,160 cases of BLLs ≥10 μg/dL in 18 states submitting industry data to the program. Of the reported 6,160 cases, the construction industry alone accounted for 20% of the total (chart 36a),6 which is disproportionately high given that construction employment accounts for just 6.4% of the overall workforce.7 Even so, the number of construction-related cases is likely underreported due to several factors:

Based on available ABLES data from 2011 to 2016, the prevalence rate of workers with BLLs ≥10 μg/dL in the construction industry has been declining, with a slight increase in 2016 (chart 36b). Highway, Street, and Bridge (NAICS 2373) and Building Finishing (NAICS 2383) were the two construction subsectors with the largest number of reported cases with BLLs ≥10 μg/dL (chart 36c).

Prevalence rates of BLLs ≥10 μg/dL among construction workers vary by state. Among the 12 states that reported five or more occupational cases in the construction industry in 2016, New York, Vermont, Louisiana, Maryland, and Connecticut reported rates above the national prevalence rate (chart 36d).

Regulations on lead have gradually been tightened over time. Lead was banned from commercial paint in 1978 and phased out of gasoline in the 1980s.1 Additionally, workers who disturb lead-based paint in facilities built before 1978 are required to be trained and certified.8 Responding to increasing evidence of adverse health outcomes at low BLLs, the NIOSH ABLES program, the Centers for Disease Control and Prevention, and the Council of State and Territorial Epidemiologists lowered the case definition for elevated BLLs to BLLs ≥5 μg/dL in 2015.4,9,10 However, the OSHA requirement to institute protections for workers exposed to lead in the construction industry has not been updated since 1993.11 Given that a substantial number of construction workers continue to have BLLs ≥10 μg/dL, enhanced efforts are needed to further protect these workers. Currently, three OSHA state plan states (California, Michigan, and Washington) where OSHA is administered by the states and not the federal government, have begun rule-making procedures to reduce the allowable exposure levels of lead for construction and other workers. 7. The percentage of construction employment was estimated using data from the 2016 American Community Survey.

All charts – For workers with more than one blood lead test in a given year, only the highest BLL for that year was included. Disclaimer: The findings and conclusions on this page are those of the authors and do not necessarily represent the official position of the Centers for Disease Control and Prevention, National Institute for Occupational Safety and Health.

Chart 36a – Total may not add to 100% due to rounding. Other includes cases without industry information. Industries are based on NIOSH’s NORA sectors. See information on the NORA sectors at https://www.cdc.gov/niosh/nora/sectorapproach.html (Accessed January 2018).