38. Fatal and Nonfatal Injuries in Construction and Other Industries

In 2015, 985 construction workers died from work-related injuries, accounting for 20% of the total (4,836) fatal injuries at workplaces in the United States,1 more than any other industry (chart 38a). Compared to its lowest level (781 deaths) in 2011, construction fatalities rose 26% in 2015 (chart 38b). Fluctuations were more pronounced among Hispanic construction workers, as fatal injuries dropped about 50% from a high of 360 in 2006 to a low of 182 in 2010, and then reached 285 in 2015, a 57% increase. The fatality trends in construction corresponded with the employment trends in this industry during this time period (see pages 2 and 20).

The fatality numbers reported in this section were obtained from the Census of Fatal Occupational Injuries (CFOI) conducted by the U.S. Bureau of Labor Statistics (BLS), including deaths among public and private sectors and self-employed workers. Therefore, the numbers presented may differ from publications that include only fatalities in the private sector. The FTE numbers in death rate calculations were obtained from the Current Population Survey (see page 10).

The nonfatal injury and illness data were extracted from the BLS’ Survey of Occupational Injuries and Illnesses (SOII). The SOII excludes the self-employed and household workers, small farms with fewer than 11 employees, and federal government employees. Prior to 2008, state and local government employees were also excluded.4 In addition, illnesses account for less than 3% of nonfatal cases in construction.5 Since many work-related illnesses may have long latency periods, such as asbestosis or cancers, illnesses are potentially undercounted in the SOII data.6 As a result, the SOII data presented in this section primarily refer to injuries among construction workers. Studies suggest that injuries among construction workers may be underreported as well.7

Both the CFOI and SOII have undergone important changes in the last decade, including changes in industrial classification systems and recordkeeping standards for the SOII data collection. Therefore, the injury data reported in this section may not be directly comparable over time. 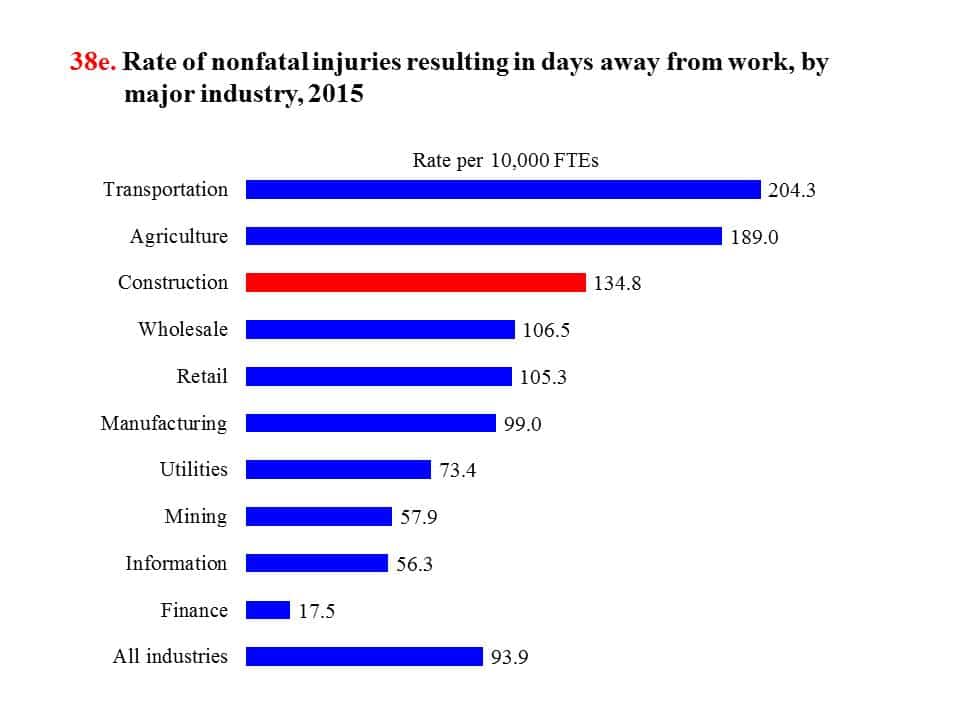 2. Effective January 1, 2002, OSHA revised its requirements for recording occupational injuries and illnesses. Due to the revised recordkeeping rules, the estimates since the 2002 survey are not directly comparable with those from previous years.

All charts – Since workers may work part-time in construction, safety and health statistics are defined in terms of FTEs to allow comparisons between industries. Full-time employment is defined as 2,000 hours worked per year (see Glossary).

Chart 38d – Annually, about 17% of nonfatal cases have no racial/ethnic identifiers.

Charts 38d and 38f – The estimates since the 2002 survey are not directly comparable with those from previous years. Due to space constraints, only even years before 2002 were selected.