For nonfatal injuries, the Specialty Trade Contractors sector also had the highest number of injuries resulting in days away from work, accounting for 68.0% of such injuries in construction – more than double the sum of the other two construction sectors (chart 39c).

The rates of nonfatal injuries decreased significantly for all sectors from 2003 to 2015. The Specialty Trade Contractors sector, which consistently had the highest injury rate among all three major sectors, fell from 279 injuries per 10,000 full-time equivalent workers (FTEs; see Glossary) in 2003 to 147 in 2015 (chart 39d). Converse to the fatality trend, both Heavy and Civil Engineering and Construction of Buildings had lower nonfatal injury rates than the overall construction industry on average during this period. However, due to smaller injury numbers, the latter subsector experienced more fluctuation in rate than the former, dipping lower during the recession and rising higher with the economic recovery.

Employment numbers were obtained from the Quarterly Census of Employment and Wages (QCEW, known as the ES-202 program until 2003), an establishment survey conducted by the U.S. Census Bureau. The QCEW collects employment data from payrolls quarterly; self-employed workers are excluded. To match the fatality data and employment data by construction sector, deaths among self-employed construction workers were excluded, and employment numbers combined the four quarters of a given year in the fatal injury rate tabulations. Fatality rates reported here were not adjusted by FTEs because the QCEW does not collect data on hours worked. Therefore, fatality data reported on this page may not be comparable to data reported on other pages. 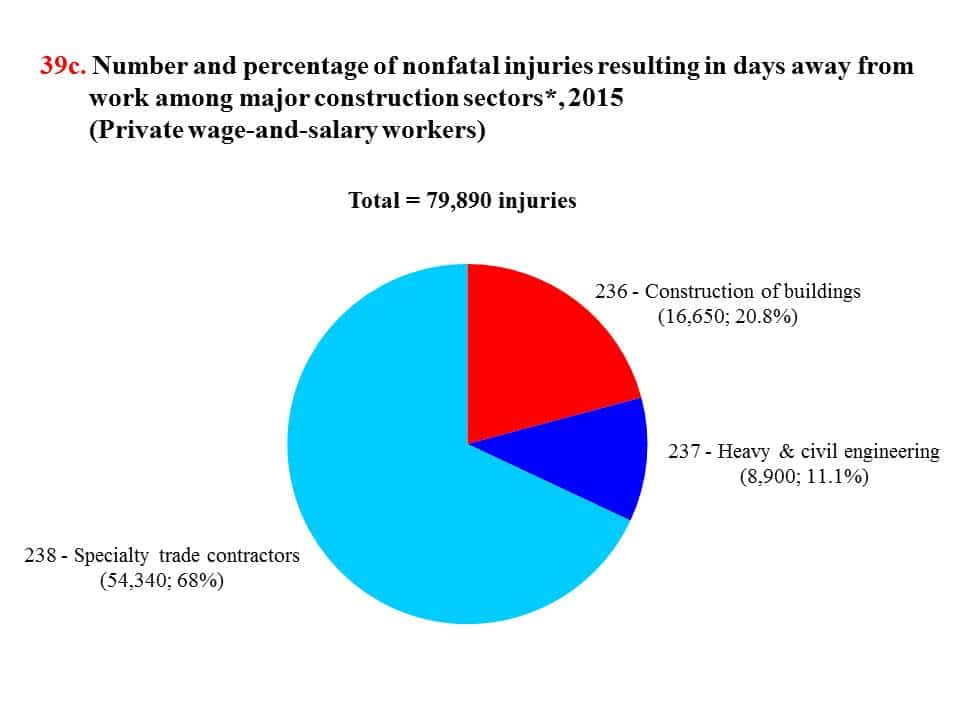 1. Illnesses comprise less than 3% of all nonfatal injuries and illnesses in construction; therefore, numbers for construction largely represent injuries and will be referred to as such in this chart book.

*For text and all charts, major construction sectors refer to the construction industry coded by NAICS at three-digit level, including NAICS 236, 237, and 238.