The U.S. Occupational Safety and Health Administration (OSHA) has been responsible for the enforcement of workplace safety and health standards in the United States since its establishment in 1970. OSHA also allows states to develop and operate their own programs, and requires that they promulgate standards “at least as effective” as federal OSHA standards. Currently, there are 28 states or territories with OSHA-approved state-plans.1

From 2010 to 2015, complete inspections (or comprehensive inspections)4 decreased from 38% to 24% of the overall construction inspections, while the share of partial inspections5 increased from 53% to 68% (chart 52b). This trend indicates that OSHA targeted projects where greater hazards may exist, or focused on particular hazards (i.e., falls) rather than complete full inspections at all worksites visited.

OSHA construction inspections differed among states. In 2015, 54% of construction establishments in the District of Columbia were inspected, more than three times the proportion in Nevada (16%) ‒ the state with the next highest inspection rate. Other states with inspection rates of 10% or higher included Michigan, Hawaii, and Oregon (listed in descending order; chart 52c). By contrast, Iowa, Montana, and South Dakota had a lower inspection level, at 2.5% or less in each. Overall, more than 36,000 federal and state inspections were conducted in construction across the nation that year.

OSHA health inspections in construction were just one-third of that for all industries (20.8%), accounting for less than 7% of all inspections in this industry. In 2015, 728 programmed silica hazard inspections in construction were conducted by federal and state OSHA, more than inspections for asbestos and lead combined (chart 52d). Altogether, these three programs account for nearly half (45%) of health-related inspections conducted by OSHA between 2003 and 2015. The presence of silica dust in the workplace increases the risk of silicosis, lung cancer, and other respiratory diseases (see page 34).6 To reduce silica exposure, OSHA’s new silica standard for the construction industry has been implemented since September 2017.7 Inhalational exposure to lead (see page 36) and to asbestos fibers can also lead to serious diseases; hence OSHA has regulated and enforced standards to reduce exposure to these two agents for decades.6,8 Standards provide additional mechanisms to protect workers from chemical exposures through safe work practices, hazard communication, training, medical surveillance, and other procedures.6-8

Along with enforcement, OSHA encourages employer voluntary compliance. The OSHA Training Institute (OTI) and OTI Education Centers offer training courses on safety and health. In 2016, more than 670,000 construction workers completed the 10- or 30-hour training.9 OSHA also awards grants to train hard-to-reach construction workers and those at high risk of incurring work-related injuries and illnesses, as well as to expand trainings in Spanish.10 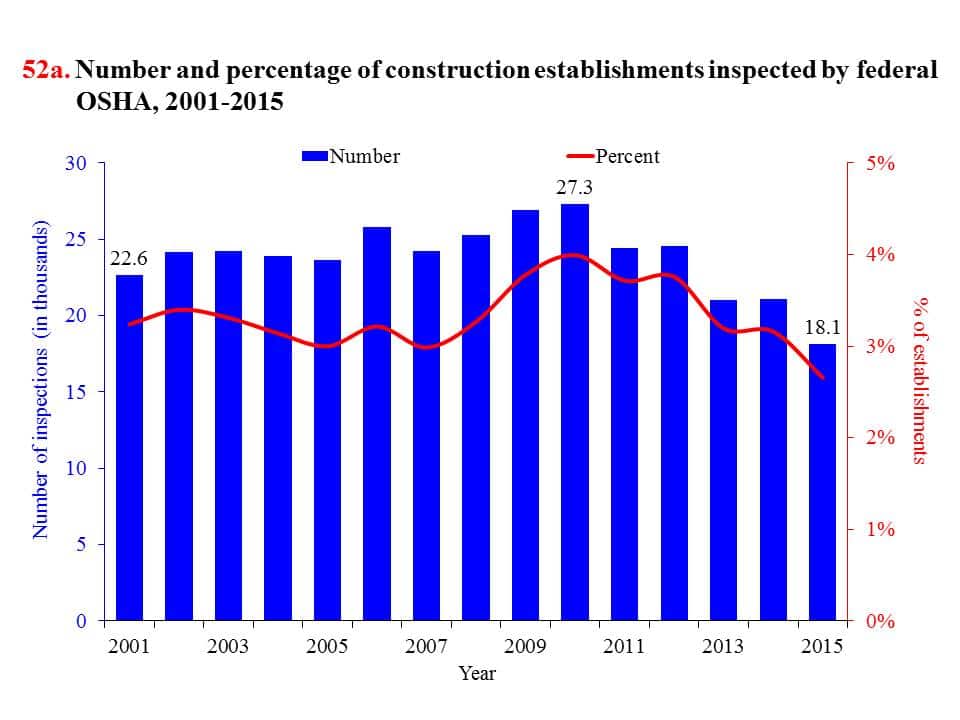 2. Except those with special notes, all numbers in the text were tabulated by the CPWR Data Center using the OSHA IMIS (or inspection) database, https://www.osha.gov/pls/imis/industry.html (Accessed July 2017). The OSHA Integrated Management Information System (IMIS) ‒ an OSHA Automated Information System ‒ includes information about every inspection conducted by federal OSHA.

4. A substantially complete inspection of the potentially high hazard areas of the establishment. An inspection may be deemed comprehensive as a result of professional judgment even though not all potentially hazardous conditions, operations, and practices within those areas are inspected. https://www.osha.gov/Firm_osha_data/100006.html (Accessed December 2017).

5. An inspection whose focus is limited to certain potentially hazardous areas, operations, conditions, or practices at the establishment.

All charts – OSHA inspects payroll establishments only. Tabulations were based on calendar years and the North American Industrial Classification System (NAICS) for a better comparison over time. Therefore, the numbers reported here may be different from OSHA reports based on fiscal years.