Among employed (see Glossary) construction workers, 2.4 million (24.5%) reported being self-employed (both unincorporated and incorporated; see Glossary) and 7.5 million (75.4%) reported they were wage-and-salary (see Glossary) workers. These proportions have shifted over the last five years. Between 2010 and 2015, the segment of self-employed workers declined from 27.9% to 24.5%, while the portion of private wage-and-salary workers grew from 67.2% to 71.6% (chart 10b). This suggests workers had no alternative but self-employment during the economic downturn, and workers preferred to take wage-and-salary jobs once the economy recovered (see page 22). The share of government employees in construction also declined slightly (from 4.9% to 3.9%), indicating that job opportunities for directly employed construction workers in the public sector are still limited.

These numbers were estimated from the Current Population Survey (CPS), a monthly household (self-reported) survey sponsored jointly by the U.S. Census Bureau and the U.S. Bureau of Labor Statistics. The CPS is a major source of labor force statistics, collecting demographic and employment information, such as gender, age, race, Hispanic origin, industry and occupational groups, unionization, hours of work, and information on unemployment.2 In addition to the regular monthly surveys, CPS supplements collect information on topics related to the labor market and economy, such as health insurance coverage (see page 26), pension plans (see page 27), and computer and Internet usage (see page 29).

The CPS classifies the labor force as either employed or unemployed. Employed persons comprise all who, during the reference week: 1) did any work for pay or profit, or worked 15 hours or more as an unpaid worker in a family enterprise, or 2) had a job but was not working because of illness, bad weather, vacation, labor-management dispute, or because they were taking time off for personal reasons. Persons are classified as unemployed (see Glossary) if they did not work during the reference week, but were available for work, and had actively looked for employment at some point in the previous four weeks. Individuals on layoff or waiting to report to work are also considered unemployed. The employed are classified by industry, occupation, and class-of-worker (wage-and-salary workers, self-employed workers, and unpaid family workers).3

In addition to self-reported data, labor force information is collected from employers, through payroll and establishment surveys such as the Current Employment Statistics (CES) survey.4 The CES covers only wage-and-salary workers on nonfarm payrolls and does not collect demographic information. As a result, data on self-employment and worker demographics used in this book are mainly obtained from the CPS and other household surveys. Since the construction industry is coded as a single category in the CPS, detailed industry information provided in this book is derived from the CES and other establishment surveys. The employment numbers estimated from the CPS and CES are also used as denominators when calculating injury and illness rates.

Although the CPS and CES have significant differences, they indicate a similar trend in employment over time (see chart 20a). Both the CPS and CES data are available from the U.S. Bureau of Labor Statistics (BLS) website; however, detailed data on construction workers provided in this chart book were tabulated by the CPWR Data Center. 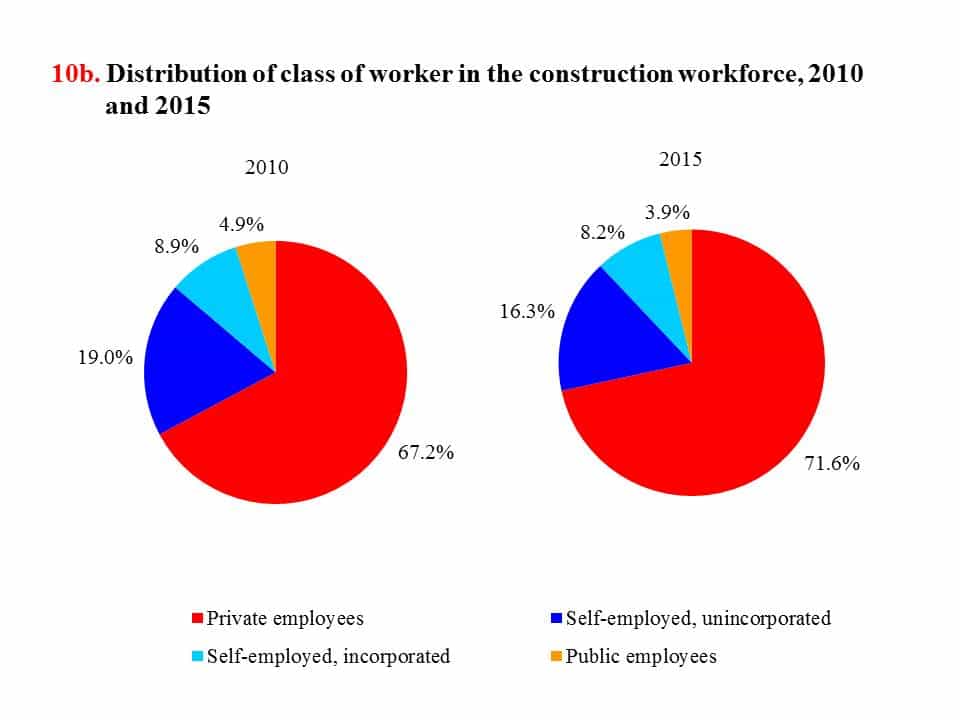 Civilian labor force – From the Current Population Survey: people who have jobs or are seeking a job, are at least 16 years old, are not serving in the military, and are not institutionalized (such as in penal and mental facilities, homes for the aged, and prisons).

Employed – From the Current Population Survey: those who during the reference week 1) did any work for pay or profit or worked 15 hours or more as unpaid workers in a family enterprise, or 2) had jobs but who were not working because of illness, bad weather, vacation, labor-management dispute, or because they were taking time off for personal reasons, whether or not they were paid for the time off or were seeking other jobs.

Unemployed – Those who did not work during the reference week, but were available for work and had actively looked for employment at some point in the previous four weeks. People on layoff or waiting to report to work are considered unemployed.

1. U.S. Bureau of Labor Statistics. 2016. Household Data Annual Averages. Table 1: Employment status of the civilian noninstitutional population, 1945 to date. http://www.bls.gov/cps/cpsaat01.pdf (Accessed February 2016). The civilian noninstitutional population consists of persons 16 years of age and older residing in the 50 states and the District of Columbia who are not inmates of institutions (for example, penal and mental facilities and homes for the aged) and who are not on active duty in the Armed Forces.

All charts – Charts cover all construction occupations, including managers and clerical staff. Figures for the self-employed provided in BLS publications prior to 2011 may include only the unincorporated self-employed, and therefore may be smaller than the estimate in chart 10a.

Chart 10a – U.S. Bureau of Labor Statistics. 2016. Household Data Annual Averages. Table 1: Employment status of the civilian noninstitutional population, 1945 to date. http://www.bls.gov/cps/cpsaat01.pdf (Accessed February 2016). This source pertains to any number in the chart book with an asterisk (*); all other numbers are from the 2015 Current Population Survey. Calculations by the CPWR Data Center.